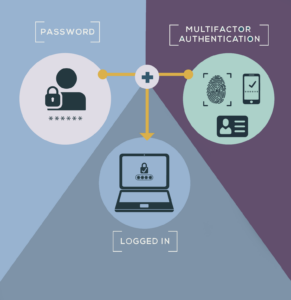 What are authentication factors?

How does two-factor authentication work? 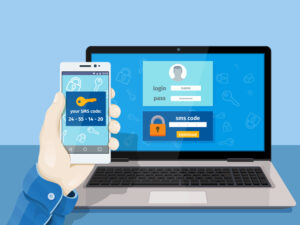 Smartphones offer a variety of possibilities for 2FA, enabling companies to use what works best for them. Some devices are capable of recognizing fingerprints, a built-in camera can be used for facial recognition or iris scanning, and the microphone can be used for voice recognition. Smartphones equipped with GPS can verify location as an additional factor. Voice or Short Message Service (SMS) may also be used as a channel for out-of-band authentication.

Apple iOS, Google Android and Windows 10 all have apps that support 2FA, enabling the phone itself to serve as the physical device to satisfy the possession factor. Duo Security, based in Ann Arbor, Mich., and purchased by Cisco in 2018 for $2.35 billion, is a 2FA platform vendor whose product enables customers to use their trusted devices for 2FA. Duo’s platform first establishes that a user is trusted before verifying that the mobile device can also be trusted for authenticating the user.

Authenticator apps replace the need to obtain a verification code via text, voice call or email. For example, to access a website or web-based service that supports Google Authenticator, users type in their username and password — a knowledge factor. Users are then prompted to enter a six-digit number. Instead of having to wait a few seconds to receive a text message, an Authenticator generates the number for them. These numbers change every 30 seconds and are different for every login. By entering the correct number, users complete the verification process and prove possession of the correct device — an ownership factor.

Two-factor authentication is a form of MFA. Technically, it is in use any time two authentication factors are required to gain access to a system or service. However, using two factors from the same category doesn’t constitute 2FA; for example, requiring a password and a shared secret is still considered SFA as they both belong to the same authentication factor type: knowledge.

As far as SFA services go, user ID and password are not the most secure. One problem with password-based authentication is it requires knowledge and diligence to create and remember strong passwords. Passwords require protection from many inside threats, like carelessly stored sticky notes with login credentials, old hard drives and social engineering exploits. Passwords are also prey to external threats, such as hackers using brute-force, dictionary or rainbow table attacks.

Given enough time and resources, an attacker can usually breach password-based security systems and steal corporate data, including users’ personal information. Passwords have remained the most common form of SFA because of their low cost, ease of implementation and familiarity. Multiple challenge-response questions can provide more security, depending on how they are implemented, and stand-alone biometric verification methods can also provide a more secure method of SFA.

Why do you need two-factor authentication?

Cyber attackers have the technological expertise to test billions of password combinations in a short period. Considering the evolving threat landscape, passwords are no longer self-sufficient to defend your user account from unauthorized access

81% of hacking-related breaches occur due to compromised passwords.

Two-factor authentication keeps attackers at bay, even when they’ve successfully penetrated through elements of your single factor authentication: username and password. Since the second factor is generally something you have, it’s difficult for a cybercriminal to lay their hands on it, resulting in better account protection. 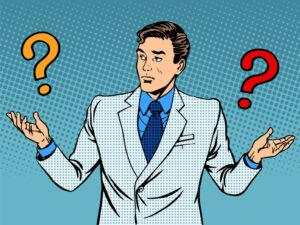 The account recovery process itself can also be subverted when it is used to defeat two-factor authentication because it often resets a user’s current password and emails a temporary password to allow the user to log in again, bypassing the 2FA process. The business Gmail accounts of the chief executive of Cloudflare were hacked in this way.

Although SMS-based 2FA is inexpensive, easy to implement and considered user-friendly, it is vulnerable to numerous attacks. The National Institute of Standards and Technology (NIST) has discouraged the use of SMS in 2FA services in its Special Publication 800-63-3: Digital Identity Guidelines. NIST concluded that OTPs sent via SMS are too vulnerable due to mobile phone number portability attacks, such as the Signaling System 7 hack, against the mobile phone network and malware, such as Eurograbber, that can be used to intercept or redirect text messages.

Most attacks originate from remote internet connections, so 2FA makes these attacks less threatening. Obtaining passwords is not sufficient for access, and it is unlikely an attacker would also be able to obtain the second authentication factor associated with a user account.

However, attackers sometimes break an authentication factor in the physical world. For example, a persistent search of the target premises might yield an employee ID and password in the trash, or in carelessly-discarded storage devices containing password databases. However, if additional factors are required for authentication, the attacker would face at least one more obstacle. Because the factors are independent, compromise of one should not lead to the compromise of others.

This is why some high-security environments require a more demanding form of MFA, such as three-factor authentication (3FA), which typically involves possession of a physical token and a password used in conjunction with biometric data, such as fingerprint scans or voiceprints. Factors such as geolocation, type of device and time of day are also being used to help determine whether a user should be authenticated or blocked. Additionally, behavioral biometric identifiers, such as a user’s keystroke length, typing speed and mouse movements, can also be discreetly monitored in real time to provide continuous authentication instead of a single one-off authentication check during login.

The difference between 2FA and MFA 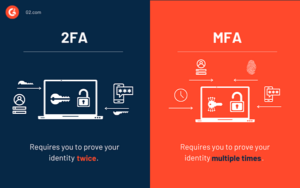 As the name suggests, 2FA challenges you to prove your identity twice, whereas MFA tests your identity with multiple factors like biometric, face recognition, time, location, and several others.

MFA is triggered when the two-step verification fails or suspicious activity is detected in the user behavior. Businesses can also use multi-factor authentication to secure sensitive information or most critical applications and services. 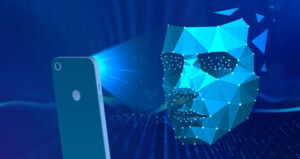 Relying on passwords as the main method of authentication no longer offers the security or user experience (UX) that users demand. And, even though legacy security tools, such as a password manager and MFA, attempt to deal with the problems of usernames and passwords, they depend on an essentially outdated architecture: the password database.

Biometrics and secure protocols are a couple examples of passwordless authentication technologies.

Using biometrics as the passwordless authentication method at the user, application and device level can better assure companies that the employees logging in to the systems are who they say there.

Going passwordless benefits organizations because eliminating the password results in better UX for their employees. Passwordless authentication introduces new ways for employees to easily and securely log in to their work without having to rely on passwords. This eliminates the need for account recovery, requests to reset passwords and the manual password rotation process.